Author of "The Book of Matt" under attack. (What a shock!) 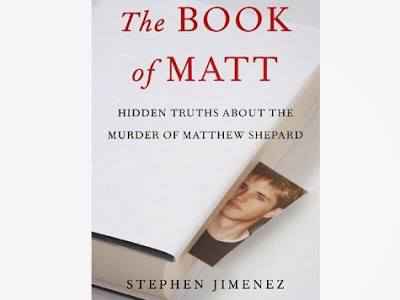 The murderer of Matthew Shepard was a member of the glbt community.
Once again, the creation of heteroseparatist.com brings me joy.  It was so stupid of the glbt community to decide to attack me.  Now shining the light on homofascism gives me great satisfaction and not even the most powerful gays in the world dare even mention the word "heteroseparatist" or my blog.  Even deleting the comments of homofascist cyberstalkers that don't even have to read my blog brings me joy!
Today, whilst on cyberpatrol, I discovered this jewel from a Facebook friend.  I wasn't surprised to find out that Matthew Shepard had been molested as a child and was himself a child molester.
﻿
“… A heretic is loose in the Church of Matthew Shepard, and the Church is out to get him.

…Faith in Matthew includes belief in the narrative that was cooked up within hours of his attack—that he was a pure victim of his homosexuality perpetrated by evil homophobes, indeed perpetrated by the hatred of the Christian right and the whole of America.

…Anyone deviating from this faith must burn at the stake. In this case, the heretic is gay journalist Stephen Jiminez, whose explosive Book of Matt has just been published by Steerforth Press.

…Jiminez’s “reporting style” is exhaustive and detailed. …more than 111 named sources listed in the back of the book, along with 20 sources who insisted upon anonymity, mostly for reasons of personal safety.

…an ugly story about how methamphetamine had slowly overtaken Laramie and much of Wyoming—how Matthew Shepard allegedly succumbed to it by becoming a member of a dangerous drug cartel working out of Denver and one of the principle suppliers of meth to Laramie. According to Jiminez, Shepard also became a dedicated user, along with his buddy and sometime sex partner Aaron McKinney, who later killed him.

…Media Matters hopes that no one actually reads the book. Comparing this review to the book makes you wonder whether Brinker actually read it.

…why someone, particularly a law enforcement officer, would fear for his family’s life over a simple homophobic murder where the killers are already serving life sentences. In fact, Jiminez’s investigation showed that Shepard was allegedly involved in a highly-organized and dangerous criminal drug enterprise and that lives were in danger.

…Matt and Aaron had sex while doing drugs in Doc’s limo.” He also reported that Matt would trade sex for drugs with Aaron and that "Aaron screwed Matt at least five times that I know of."

…McKinney’s girlfriend Kirsten Price asserts they cooked the whole thing up the night of the murder. "I don't think it was a hate crime at all," she told ABC News. "I never did." The hate crime claim also was asserted by two of Shepard’s friends, Alex Trout and Walt Boulden, who "began spreading the word," according to that same ABC report.

…Each of them had a reason to promote this theory: Matt’s friends in order to advance the myth, and Aaron in order to save himself without getting clipped by his drug masters.

…If McKinney testified to the drug angle, he put himself in danger from his drug bosses in Denver. They would have killed him in prison.

…the early interview was part of the gay defense he ginned up in the hours before his arrest.

…The story of Matthew Shepard’s life and death is ugly beyond belief. Jiminez states that he was sexually abused several times as a boy. He also reveals that Shepard himself was arrested for sexually abusing boys in his neighborhood. Shepard battled most of his life with depression, anxiety, drug abuse, alcoholism, and dangerous sexual activity,

…He was HIV positive.


Full article here.
Posted by Mantronikk at 11:54 AM