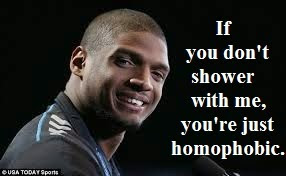 Well Mr. Sam, when you broadcast to the world that you enjoy having sex with other men, there are men that are going to shun you.  There are even going to be men who won't shower in front of you in the locker room that you have access to, lest they catch you staring at their penises and be forced to defend themselves from homosexual harassment.  A fist fight can seriously damage a man's life.

If a woman objects to me staring at her breasts or her behind, no one would call her "phobic."  Yet if I, or any other man, object to being ogled by a homosexual, we are shamed by homofascists.  The term, "gay shower panic" was created shortly after Michael Sam announced his homosexuality to the world.  Wow.  Amazing.  I live in a world where men are shamed for objecting to sexual harassment.

Common-sense points to the probability that Michael Sam got tired of being shunned by his teammates.  Many people are tired of glbt propaganda, but don't know how to articulate their aversion to perversion in the shadow of sophisticated homosexualist propaganda.  So many people just quietly walk away from members of the glbt community.  What do you call people who shun the glbt community out of sorrow/disgust, but do not hate or fear gays?  The best word that I could come up with was "heteroseparatist."

More info here.
Posted by Mantronikk at 1:36 AM