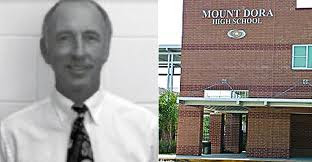 “And now they showed two guys kissing after their announcement. If they want to call it a union, go ahead. But don’t insult a man and woman’s marriage by throwing it in the same cesspool of whatever. God will not be mocked. When did this sin become acceptable?”

Three minutes later, Buell posted another comment: “By the way, if one doesn’t like the most recently posted opinion based on biblical principles and God’s laws, then go ahead and unfriend me. I’ll miss you like I miss my kidney stone from 1994. And I will never accept it because God will never accept it. Romans chapter one.”

“The school district is being anti-straight, anti-First Amendment and anti-personal liberty,” said Horatio Mihet, an attorney with the Liberty Counsel. “The idea that public servants have to whole-heartedly endorse homosexual marriage is repugnant to the First Amendment of the U.S. Constitution,”..."

Story here.
Posted by Mantronikk at 11:40 AM