The Corkins Award. (for homofascist-of-the-year) 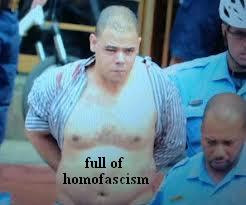 On 01 August 2012, Chick-fil-A dealt such a devastating blow to homofascists and marriage redefiners that on 15 Aug. 2012, a Mr. Floyd Corkins took a 9mm Sig Sauer pistol, 45 rounds of ammunition, and 15 Chick-fil-A sandwiches (to place beside each person he killed) into the FRC in Washington D.C. Mr. Corkins was stopped by an unarmed security gaurd after he shot the security guard in the arm.

This is what the "hate" label-placed on anyone who disagrees with the redefinition of marriage-does. How ironic that the "hate" label itself inspires hate. Now the homoOrwellian circle is complete and homofascists are now worse than their phantom "oppressors."

If a member of the Westboro Baptist Church committed an identical act of violence against the headquarters of the HRC with 15 empty Starbucks cups to place beside each fatality, wouldn't the mainstream media hold ALL Christians responsible for the actions of the shooter? Wouldn't there be a thunderous outcry against Christian doctrine for motivating the shooter even though the teachings of Jesus Christ decry proactive violence? Hasn't Floyd Corkins added to the embarrassment of homofascists and marriage redefiners? Did homofascist Corkins put a cork in homofascism?

What a great month for heteroseparatism!!
Posted by Mantronikk at 2:00 AM