Dear Governor Mike Pence; being inarticulate does not make you wrong.

In response to the interviewer's yes-or-no question, Governor Mike Pence should have said "Do you want true Christians to be prosecuted for refusing to participate in same-sex 'marriage'?"  Governor Pence comes off looking like he doesn't know what he's talking about simply because he is not as articulate as the interviewer.

True Christians deserve the same legal protections that the glbt community has.  Any person should have the right to deny service to someone due to their behavior.  Skin color is not a behavior.

Religions are created by men; what humanity currently calls "Christianity" comes from God Himself.  Cutting someone's head off with a knife because they refuse to convert to Islam is a "religious belief."  Refusing to comply with the redefinition of marriage is something that a true Christian should not be persecuted or prosecuted for.  My country was founded for religious freedom, but the Constitution could have been written better.

More info here and here.
Posted by Mantronikk at 11:00 AM No comments:

Planet Fitness will allow a man to undress in a women's locker room, but tell a woman to cover herself up while on the exercise floor.
Posted by Mantronikk at 6:14 PM No comments: 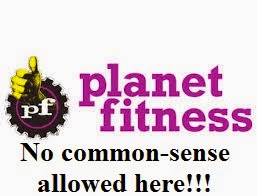 A woman walks into the women's locker room in a Planet Fitness and sees a man there.  She, rightfully, complains to the management and, when it is all said and done, HER membership is revoked.  Planet Fitness says they have a "no judgement" policy.

So now it's "judgmental" to tell a person with a penis that he cannot go into the women's locker room. I would laugh if this case weren't so sad.  It is sad that so many people have been educated out of their common sense.  Reality is something that exists even when it is ignored.  It is a fact that the person that had a penis should not have been in or allowed in the women's locker room to change his clothes.

The man who entered the women's locker room at Planet Fitness should have immediately lost his membership and been arrested and placed on a psych-hold by the police.  The man needs psychiatric help if he thinks that he is a woman.  And the woman should have been apologized to by the management of the Planet Fitness for endangering her safety.  When will a woman or young girl be raped by a male in a place where a male should never be because the male simply "identifies as a female"?

If my mother encountered a man in the women's locker room or restroom and I was nearby I would have a serious discussion with that man.

Story here and here.
Posted by Mantronikk at 9:55 PM No comments:

A "marriage" between three men. 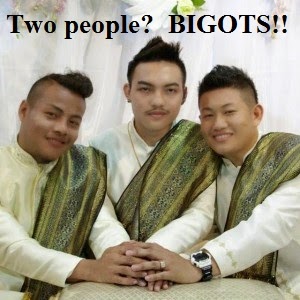 Couldn’t it be considered bigotry to say that marriage is between two people? What if a woman wants to marry her boyfriend and her horse? Who is to say that she is wrong? What about her constitutional right to pursue happiness? This is why God defined marriage. God knows what He’s doing.

“… “Love occurs unconditionally and is not limited to only two people,” Art wrote on Facebook. “Love brings peace to the world.”

But after this month’s report out of Thailand, some Christians are noting the inevitable slippery slope that they have stated would result if society deviated from God’s creation order.

“The events in Thailand simply confirm what we’ve been saying all this time: If marriage is no longer the union of one man and one woman, then it can be anything: Two men, two women, three men, three women, or an almost infinite number of other possibilities,” Dr. Michael Brown wrote for Charisma News.

…He noted that the situation demonstrates how mankind has made up its own rules along the way in an attempt to legitimize and justify what a particular person wants. Since homosexuals have stated that marriage should be defined as the union of two people who have feelings for each other, regardless of gender, where does the rule about two people come from?

“If a gay activist says, ‘But marriage is the loving, long-term commitment of two people,’ the answer is simple: ‘Says who? That’s just your new definition. Where did you get the idea it was two people if not from its historic, natural meaning?'” Brown explained. “And so, if I’m ‘bigoted’ because I don’t recognize same-sex ‘marriage,’ then gay activists (and their allies) are just as ‘bigoted’ if they don’t recognize three men (or women) ‘marrying.’

“Those who have taken down the fence of marriage as God intended it have opened up a Pandora’s Box of possibilities,” he said, “none of them good.” …”

Full story here.
Posted by Mantronikk at 11:28 AM No comments: 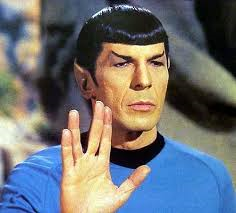 I heard the news at 1000hrs on 27 Feb. 2015, and I found myself shedding a few tears before regaining control of myself.  And I wanted to post this way sooner than I did.

I've known this man's face since 1968, when I watched my first episode of Star Trek.  And an entire Star Trek movie was dedicated to Mr. Spock.

Part of the way I think and communicate is because of my observations of the interactions between Mr. Spock and Captain Kirk.  As a child, I always admired the purity and accuracy of the information that Mr. Spock articulated to Captain Kirk and I dedicated myself to the science of communicating information accurately.  This is part of the reason I created the word "heteroseparatist."  There was no single word to communicate my hate-free decision to distance myself from those who choose to join the glbt community, so I created one. 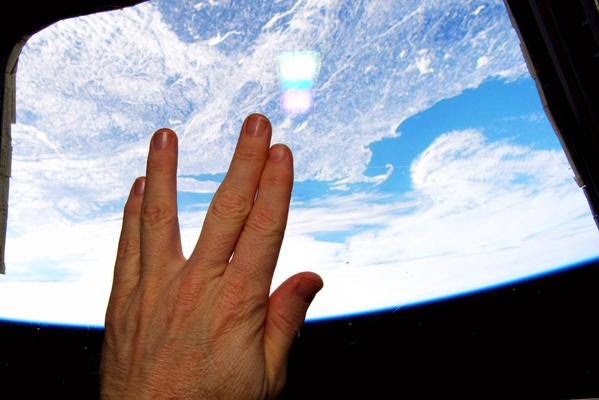 More info here.
Posted by Mantronikk at 10:30 AM No comments: