Was UCSB shooter Elliot Rodger a member of the glbt community?

This man killed more men than women.
Posted by Mantronikk at 10:15 AM No comments:

I will go further than Amy Kushnir and say that it is a perverted, disgusting thing for two men to kiss in a sexual way.  And that's not my opinion, that's the Word of God.

More info on her story here.
Posted by Mantronikk at 2:16 PM No comments:

Attack on an "anti-gay" woman by a homofascist woman.

Ms. Christine Weick, the woman holding the sign, had obviously been menaced by a male before the woman in red, Jessica Prince, physically attacked with the slushie, at 0:00:28.  Also, after the slushie attack, and a clear warning that mace would be used if the woman in red took another step towards her, Ms. Weick still did not use her mace even though the woman in red still took steps toward Ms. Weick.

And listen to the profanity, anger, and observe the obscene gestures that come from the woman in red.  This is a clear indication of the hateful spirit that inspired her physical and verbal attack against the sign-holding woman.  This video shows the difference in the spirit that motivates the two women.  Then, on top of all that, the woman in red speaks of the Hell that she herself is headed to!

It is very true that those who hate the truth call the truth hate.
Posted by Mantronikk at 2:09 PM 2 comments:

This woman, Amy Kushnir, has been threatened with rape for expressing her aversion to two men kissing in a romantic way.  To threaten someone for being disturbed by two homosexuals kissing is what homofascism is all about.

Great explanation from the Benham Brothers.

The words of false or grossly immature Christians are almost always what you hear on the mainstream news, so this video brought me a little bit of joy.  When true, mature Christians speak, the arguments of the glbt community are crushed.

There is no hate in a true Christian. It is actually love that causes a mature Christian to speak out, in love, about homosexuality and other sexual sins.  When I was pulled into this cultural conflict by a homofascist and created the word "heteroseparatist," it was due to my dedication to the Word of God, and my knowledge of the final destination for those in the glbt community.  I hate to see people being deceived by propaganda, and everyone who supports gay sex and the redefinition of marriage has been deceived.

More info here.
Posted by Mantronikk at 3:24 PM No comments: 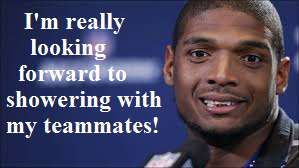 The Benham Brothers vs. HGTV.

Most members of the glbt community hate God and, subsequently, His adopted children.

30 slanderers, God-haters, insolent, arrogant and boastful; they invent ways of doing evil; they disobey their parents;

More info here and here.
Posted by Mantronikk at 7:37 AM No comments:

Such Were Some Of You.


I recognized this verse fragment immediately.  The inspired Word of God says that ex-gays were part of the original church.  The ex-gay community began after the resurrection of the Lord Jesus Christ!!  The glbt community is already hating on this video because it talks about the origin of same-sex attraction.

9 Do you not know that the unrighteous will not inherit the kingdom of God? Do not be deceived. Neither fornicators, nor idolaters, nor adulterers, nor homosexuals, nor sodomites, 10 nor thieves, nor covetous, nor drunkards, nor revilers, nor extortioners will inherit the kingdom of God. 11 And such were some of you. But you were washed, but you were sanctified, but you were justified in the name of the Lord Jesus and by the Spirit of our God.
Posted by Mantronikk at 2:24 PM No comments:

I really don't like using the word "cute," so I won't.  But I just had to post this video.
Posted by Mantronikk at 3:50 PM No comments: