I was originally going to title this post; "GoFundMe vs. homofascism," but GoFundMe has apparently holds human law above God's laws.  If GoFundMe received a complaint from a Christian organization about a glbt organization, would it quickly shut down the donations to the glbt organization?

A GoFundMe page that was set up to assist Sweet Cakes bakery made over $100,000 in less that 12 hours(!), but was shut down after complaints, reportedly, by neighboring, homofascist bakeries.  Then Samaritan's Purse stepped up to fight homofascism here.  Glory to God!! 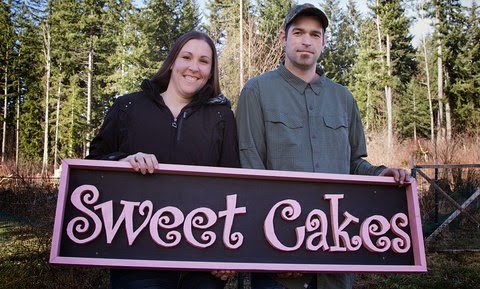 The blatant hatred from the glbt community for true Christians who simply stand on/for God's definition of marriage is so astounding, it caused me to donate to the Samaritan's Purse link above.

Story here, here, and here.
Posted by Mantronikk at 9:19 AM No comments: 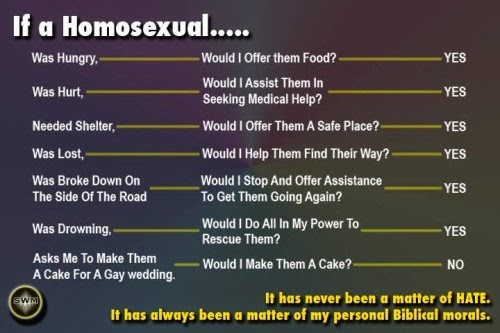 This picture explains my point of view very well and the point of view of many others who won't support or participate in a same-sex "marriage."  Those who reject the inspired Word of God/The Bible will never know the truth.
Posted by Mantronikk at 9:33 AM No comments:

Here is a great explanation of RFRA.

Posted by Mantronikk at 4:00 PM No comments:

At 4:04, the owner of Memories pizza, Kevin O'Connor states that his business does serve homosexuals, yet they will not cater a same-sex "wedding." Whether they are straight or gay, disagreement infuriates a homofascist. This same Christian business would refuse all other deviations from Jesus' definition of marriage.

I went to the GoFundMe website to donate to Memories Pizza but donations were closed for some reason.  I believe that donations were closed to prevent the owner of Memories pizza from becoming a multi-millionaire, and to prevent people like me from having hard evidence of just how many people are fighting back against business-busting homofascism.

Then, in the video below, look how glbt businesses openly display intolerance towards differing viewpoints.

More info here.
Posted by Mantronikk at 2:34 PM No comments: