SCOTUS has fallen: It's open season on true Christians. 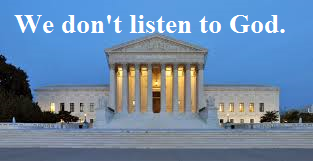 Well, I can't say that I'm surprised. I'm saddened, but not surprised.

The word "gay" is a noun and a verb, the word "black" is just a noun.  This subtle difference has flown over the heads of many and allowed the glbt community to falsely portray their redefinition of marriage as a civil rights issue.

How long will it be until business-busting-homofascists start targeting Christian businesses?  Even Chief Justice John Roberts has foreseen the coming wave of anti-Christ homofascism.

Posted by Mantronikk at 12:55 PM No comments:

How many homosexual men are looking at this young boys behind?  Look at the approving gazes of the adults surrounding this homosexual-in-the-making.  "Fighting homophobia," is what the homosexuals at this event call this little boy's sexual gyrations.

Posted by Mantronikk at 12:50 PM No comments:

Posted by Mantronikk at 10:16 AM No comments:

Estrogen-juice-Bruce is a silly goose on the loose.

I thought I was going to loose control of my bladder while I was watching this video.  I was amazed at the biblical accuracy of the speaker in this fantastic video.

A shocking discovery for a homosexual couple.

Look at how these men begin to cry after finding out what they find out.  If homosexuality is so okay, why are they crying?  Is there some shame involved?
Posted by Mantronikk at 6:00 AM No comments:

Estrogen-juice-Bruce is on the loose.

I found this great video that says even more than I wanted to say.

Bruce Jenner, who was still born with a penis, is finally getting the attention that he was apparently missing out on in the shadow of the Kardashian women.  What happened to this man?  Why has he done this to his children?

More heart wrenching info here and here.
Posted by Mantronikk at 8:49 AM No comments:

I first heard about this story about four days ago from Fox news, and I'm in the middle of a rare, low-stress day off, so I finally have time to investigate and address this case that doesn't surprise me one bit.

Homosexual activists will do anything to normalize homosexuality to those who don't know the Truth and I am so glad that I discovered the Truth when I was 17.  This blog wouldn't exist had not the glbt community attacked me for merely disagreeing with their behavior.

Anyhow, the link to this story on retractionwatch.com is here.  And more info is here, and here.
Posted by Mantronikk at 11:56 AM No comments: