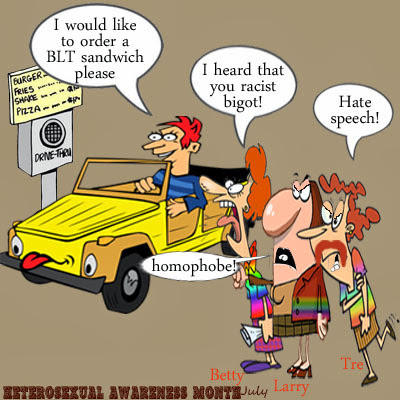 Posted by Mantronikk at 1:13 PM No comments:

A true Christian's reaction to homofascism.

Just when I was lamenting the lack of fresh material to blog about, I find this jewel of a video among my newly reestablished desktop shortcuts.

These two videos, especially the one above,  perfectly illuminate how a true Christian reacts to life-endangering homofascism.  Mr. Leo Johnson, the black man in the videos, is the hero who saved an unknown number of lives-including his own-by his awareness of his surroundings, his adherence to his security training, and, above all, his awareness of the Holy Spirit.

The members of the glbt community and those who support their sexual activities are not in touch with the Holy Spirit and have already lost their war against the Word of God.
Posted by Mantronikk at 12:32 PM No comments:

Would a homosexual owner of a t-shirt printing business be legally bound to print "God hates fags" on a bunch of t-shirts?  Would an American court order a vegetarian photographer to create a documentary video for a slaughterhouse?  Would a Muslim bakery be forced to bake a wedding cake for a homosexual couple?  Are there still people out there that can't discern the difference between race and sexual behavior?
Posted by Mantronikk at 11:25 AM No comments:

Homofascists hate the truth.  Even if the whole secular world accepts the glbt community and same-sex "marriage" as normal, homofascists and homosexuals still cannot escape the judgement of God.
Posted by Mantronikk at 1:38 PM No comments:

Homofascist-of-the-year gets 25 years in prison. 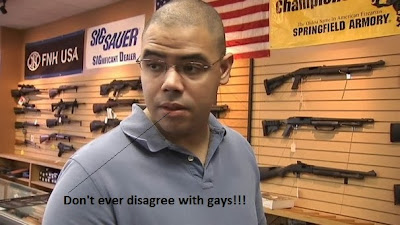 Disagree with a homofascist and you might just be murdered.

It's a good thing that Mr. Corkins is so gay oriented.  That'll help him during his long stay in prison.

How many times do true Christians go into gay nightclubs and start killing people?  NEVER.  The moment a person decides to kill someone because they're gay, they are no longer Christian, no matter what they say or think.

More info here.
Posted by Mantronikk at 2:46 PM No comments:

The CDC on HIV and MSM. 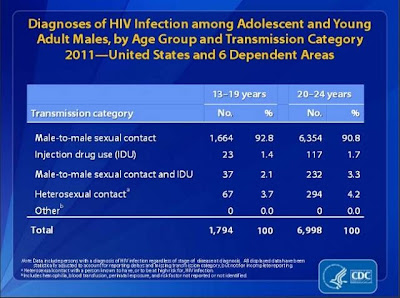 Full info here.
Posted by Mantronikk at 10:53 PM No comments:

The Book of Matt (How Matthew Shepard's killer was a member OF the glbt community.) 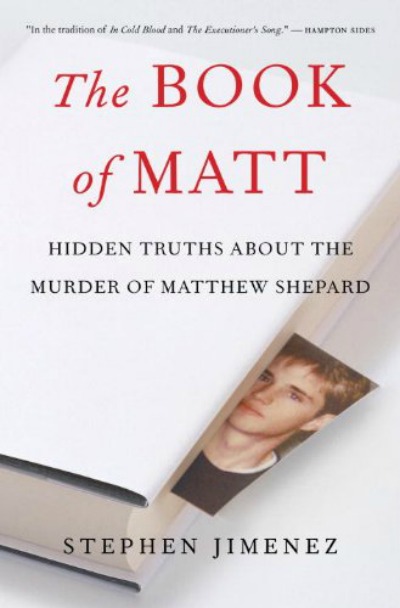 
“…Almost everything you think you know about the Matthew Shepard narrative is false.

Matthew Shepard was the winsome young homosexual in Laramie, Wyoming who in October 1998 was tortured, killed, and left hanging grotesquely from a fence. He was discovered almost a day later and later died in the hospital from his horrific wounds.

…Thanks to a new book by an award winning gay journalist we now know that much of this narrative turns out to be false, little more than gay hagiography.

…“How do people sold on one version of history react to being told that the facts are slippery --- that thinking of Shepard’s murder as a hate crime does not mean it was a hate crime? And how does it color our understanding of such a crime if the perpetrator and victim not only knew each other but also had sex together, bought drugs from one another, and partied together?”

This startling revelation comes in The Book of Matt to be published next week by investigative journalist Stephen Jiminez, who over the course of years interviewed over 100 people including Shepard’s friends, friends of the killers, and the killers themselves.

According to The Advocate, one of the premier gay publications in the country, Jiminez “amassed enough anecdotal evidence to build a persuasive case that Shepard’s sexuality was, if not incidental, certain less central than popular consensus had lead us to believe.”

Even before Shepard died, two of his friends were peddling the narrative that he died at the hands of vicious homophobes. Within days the gay establishment latched onto what would drive the hate crimes story for years to come…

…it turns out, according to Jiminez, that Shepard was a meth dealer himself and he was friends and sex partners with the man who led in his killing. Indeed, his killer may have killed him because Shepard allegedly came into possession of a large amount of methamphetamine and refused to give it up.

The book also shows that Shepard’s killer was on a five-day meth binge at the time of the killing.

As to be expected, Matthew Shepard Inc. is rallying to denounce the new narrative that his homosexuality had little or nothing to do with his murder. …”

Posted by Mantronikk at 4:51 PM No comments:

The truth behind the worst-twerking-fail-ever video.


Jimmy Kimmel is a genius.
Posted by Mantronikk at 7:05 AM No comments:


There are some people that are so far gone that they think that a person's genitals have nothing to do with their gender.
Posted by Mantronikk at 2:41 PM No comments:

Posted by Mantronikk at 11:15 AM No comments:

Posted by Mantronikk at 3:12 AM No comments:


Look at the clarity in this wonderful woman's eyes as she speaks.
Posted by Mantronikk at 1:40 AM No comments:

This is exactly what true Christians have been warning about. 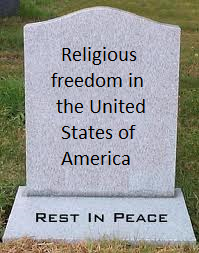 Well... who can deny it now?  This is what the servants of the Lord have been fighting to prevent.  The loss of the freedom to follow the Lord.  With the redefinition of marriage, the glbt community has legalized the persecution and prosecution of true Christians.

“…Klein told me he received messages threatening to kill his family. They hoped his children would die.

The LGBT protesters then turned on other wedding vendors around the community. They threatened to boycott any florists, wedding planners or other vendors that did business with Sweet Cakes By Melissa. …”

In my personal life, I will never associate with someone who supports the redefinition of marriage.

Tragic story here and here.
Posted by Mantronikk at 8:06 AM No comments: