The hatred from the glbt community still amazes me.

I’m constantly watching online news sources for examples of homofascism and I’ve been unable to find a suitable incident/story about which to blog for over two weeks now, but that drought came to a crashing end about six days ago.

“…Masterpiece Cakeshop owner is suing Colorado officials over his refusal to bake a cake for a transgender woman.

Liberals and gay activists remain obsessed with forcing Christians to bake their cakes. And the answer, in the name of individual, religious and even gay civil rights, must still be no.

…This time, the set-up involves a request for a variety of cakes that would violate his religious belief, including a cake celebrating a gender transition.

…He has always served all customers, including gays and lesbians, but as an artist his faith requires him to not participate directly — like the specific creation of a cake — in efforts that violate his faith.

…the Colorado commission notified Phillips that they were, again, launching new proceedings against him because of the “transition celebration” cake refusal.

… the government is intent on destroying him — something the Supreme Court has already told it not to do.”

As a gay woman who has been involved in efforts to ensure the equal treatment of gays and lesbians, I remain appalled at how the liberal gay activist agenda has become exactly the same thing the original gay civil rights movement fought against. The gay rights movement originally was an effort for us to be left alone and to not be punished for who we are. We simply wanted to be able to live our lives without fear of arrest, or our businesses raided or destroyed, because of who we were.

…It is now gays and lesbians targeting other people for punishment and destruction, simply because of who they are.

…Now, it’s Christians being hounded by a liberal elite in power in government and society who are demanding, ironically, that Christians should be harassed, punished, fired or lose their businesses because they’re different and don’t conform. This much we know: Supporting the spark of freedom that fueled every civil rights movement requires supporting Christians who are targeted for their faith, and absolutely the ADF in their defense of Jack Phillips. …”

Amazing. Now, even gay people are starting to cry out against homofascism. 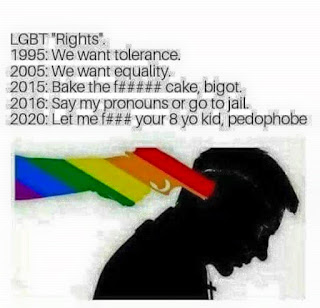 Posted by Mantronikk at 2:16 PM No comments: