Actress Ellen Page Declares She is a Man Named Elliot. 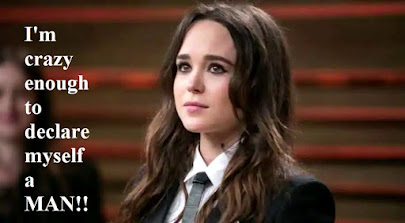 .
I'm so glad to be back in business!!
I had a title for this post already in mind, but when I transferred the video, the title transferred also, and it was just too good to change.
Ben Shapiro does an amazing job of exposing the transmadness of Ellen Page, even bringing up something that I wouldn't have thought about... how "he" is now ineligible to play a female character, due to glbt rules and regulations.
Now, the entire internet is calling her a "he," and her name is also been switched to "Elliot."  The entire internet is going crazy to prove how "woke" it is.
More info here.
Posted by Mantronikk at 1:49 PM No comments:

It's difficult to know where to start again after being gone for so long, but, between a worldwide, reinvigorated pandemic, civil riots, election drama, and the deaths of family and loved ones, I've been kinda busy.
But I can't sleep, and it's 4:54 am, and I'm off tomorrow... time to retrain with my old, but upgraded, lightsaber.
Just posting this video was difficult because of the technical upgrades that have been put in place since I've been gone, but illuminating the glbt community's hatred for those who simply disagree with their lifestyle choices is my clunky reentry into the fray.  I presume that I'll find my proper stride in the future.
Look at how this woman's message to protect children is attacked by the homofascists that are holding signs in the background.  Why can't those who disagree with exposing their children to homofascist propaganda speak without harassment?  If the glbt community is so right, why do they want to silence those who disagree with their life choices?
I read the Word of God daily to keep from being caught up in the propaganda of the Godless people of this world.
I can understand why this woman speaks out against transmadness; her marriage was ruined by transdelusionality.
More info here.
Posted by Mantronikk at 5:56 AM No comments:

Well, between the illegal-street-racing car crash death of my youngest, 27-year-old nephew, and a world-wide-pandemic, I've been kinda busy.  But I have an unusual, unexpected amount of free time today.

Yet again, those who hate the Truth call the truth hate.

Those who follow Jesus will always be hated by those who don't -it's not vice-versa.  We are allowed to be angry at certain things, but we are not allowed to harbor hatred in our hearts towards other human beings.

The glbt community believes a complete lie; that I and my fellow servants of the Son of God are acting out of hatred when the reverse is the actual truth.  Despite of YOUR hatred, we are still trying to save your souls from a place where your going to be tormented for eternity.

Here's a thought glbt community; if you don't like us... leave us alone.  Doesn't your harassment of us show your hatred?

This story illuminates my point.  In the video above, the words "Anti-LGBTQ" are so large in order to grab the eye and poison the mind within the first two seconds of observation.  Shameless propaganda to bear false witness against those who are trying to save lives.  No true Christian would refuse to rescue or deny medical care to a member of the glbt community; but we still will hold on to the commandments of Jesus Christ who defines marriage as being between one man and one woman.

The glbt community is fighting against GOD, not human prejudice.

"... We believe God's plan for human sexuality is to be expressed only within the context of marriage, that God created man and woman as unique biological persons made to complete each other.  God instituted monogamous marriage between male and female as the foundation of the family and the basic structure of human society.  For this reason, we believe that marriage is exclusively the union of one genetic male and one genetic female.  …"

More info here , here, and here.
Posted by Mantronikk at 11:23 AM No comments:


Well, the new year is here and, now that other major projects have been completed, I finally have time to attend to my blog.  I'm glad to be back to defend the truth.

This man, Jonathan Yaniv, is a telling representative of the so-called "transgender" division of the glbt community; driving women out of business for refusing to wax his penis because he insists that his penis is a vagina and local law supports his transdelusionality.

The so-called "transgender" division of the glbt community is constantly shining the light on the mindset of their community, and people are backing off because of the obvious insanity that's gripping the minds of those who think that they can change their gender.  The face of the man in the video below strongly supports my point.

Posted by Mantronikk at 12:47 PM No comments: