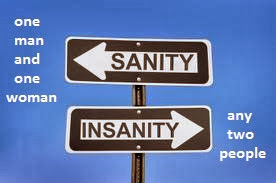 So, once again, I have a piece of irrefutable evidence that proves the insanity of those who support the sexual activities of the glbt community and the redefinition of marriage.  The biological reality that it takes a human male and a human female to make a human child is just plain ignored.  I never thought that this scenario would become a reality, but, sadly, it has.

What kind of a world do I live in where a man can "marry" another man, sodomize that man for a year, and then go to his employer or the employer of his penis-having "wife," and be awarded money for infertility treatments?  Can anyone see how this new law would make an employer less likely to hire a homosexual or a lesbian?  Is there anyone who would dare defend this absurd new law?  Can anyone question my logical divorce from the insane concept of same-sex "marriage"?

When you're grounded by the Word of God you are largely unaffected by the voltage of homofascism.

Link to absurd info here.
Posted by Mantronikk at 11:21 AM