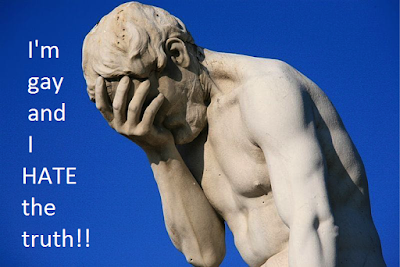 When I was first pulled into the conflict between the glbt community and those who know the truth, one of the points that was constantly quoted by homosexual activists was the APA's endorsement that people were born homosexual.

But, just a few days/weeks ago, the APA has taken a position that refutes the glbt community's claim that people are "born gay."

And, as usual, the Word of God reveals that people have been leaving what is now called the lgbt community for at least 1900 years.  "Born gay" is a lie, and the concept is even being abandoned by the Godless.

Full story/data here and here.
Posted by Mantronikk at 1:36 AM