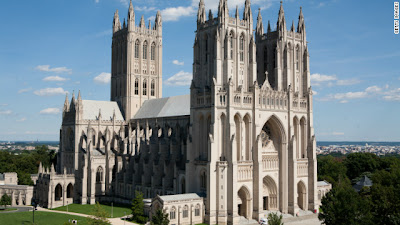 II Timothy 4:3  For the time will come when they will not endure sound doctrine; but wanting to have their ears tickled, they will accumulate for themselves teachers in accordance to their own desires, ...

The Word of God says that a marriage is between one man and one woman.  I thought that the United States of America was "one nation under God."

So what happened?  This is a church, yet they don't know whats in the Bible concerning homosexuality?  Huh?  What?!?  How is it that The Washington National Cathedral is now hosting same-sex "marriages"?  This nation is becoming more and more immoral, and God will further remove His protective hand from the United States when organizations like the Episcopal "Church" provoke Him to anger by supporting the abomination of homosexuality in His own house!!  Scripture clearly shows how God feels about His home being disrespected.

Gut-wrenching story here.
Posted by Mantronikk at 11:18 AM