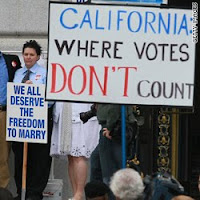 I've said it once and I'll say it again, a homosexual man has the same right to marry one woman at a time just like I do. We all already have the freedom to marry. Again I'll ask; Why doesn't the glbt community just flat-out say that they want to redefine marriage? How come polygamists aren't trying to ruin those that support true marriage like some/most gays do?
The legitimate vote of the people of California has been temporarily upheld by the Ninth Circuit Court of Appeals and marriage will remain what it should be for at least a little while longer.
I'll bet that Judge Vaughn Walker is having some Johnnie Walker right about now. Story here.
Posted by Mantronikk at 6:31 PM