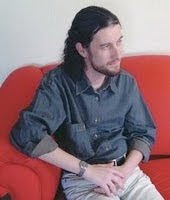 <----This man, Mr. Julio Servio, fights homofascism just like I do...with a blog. And, although he denounces hatred and has never condoned violence against the glbt community, the glbt community in his country wants to destroy him. Now where have I heard that story before?

“...Pay Pal corporation has returned funds it froze mid-September in pro-life and pro-family activist Julio Severo’s account following a campaign by militant homosexuals to cut Severo off from the company’s service.

...a petition drive that gathered more than 10,000 electronic signatures and offers of legal help from multiple groups defending the rights of Christians, PayPal informed Severo that it would make an “exception” and release the funds.

Julio Severo and others were accused of peddling “hate,” although Severo makes it clear that he has no animosity towards homosexuals and wants them to be rescued from the self-destructive homosexual lifestyle.

Also targeted by the campaign have been such groups as Tradition, Family, and Property (TFP), a Catholic group that defends the rights and dignity of Christians and opposes sodomy, and Americans for Truth About Homosexuality, which seeks to inform the public about the facts about the “gay” lifestyle. ...”

Full article here.
Posted by Mantronikk at 10:56 AM