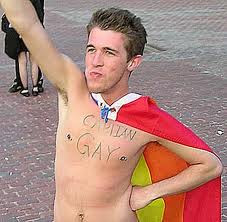 Although I do NOT support Brandon McInerney's killing of Larry King, I do understand his anger at homosexual harassment.

"...McInerney, then 14, had reached an emotional breaking point after King made repeated, unwanted sexual advances toward him and other boys, defense lawyers said. In the weeks leading up to the shooting, school administrators allowed King to wear heels and makeup because federal law provides the right of students to express their sexual orientation. ..."

"...King's father also blamed the school district for not doing more to address the brewing feud between the two teens and their son's flamboyant behavior. "Instead of protecting him from himself and his poor impulse control, they enabled and encouraged him to become more and more provocative," Greg King said. ..."

Posted by Mantronikk at 2:06 PM