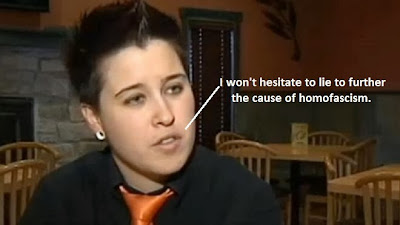 On 22 Aug. 2012, lesbian woman Charlie Rogers claimed that she was attacked by three men who carved swastikas into her skin.  I was moved with compassion and posted this.  Then it turned out that her story was faked.  Wow.  How weird.

Well... it looks like we've got another Charlie Rogers on our hands except this time her name is Dayna Morales.  And she told a lie on a heterosexual couple who can prove that they DID tip her and DIDN'T write any note on their receipt attacking her for her lesbian lifestyle.

Once again I present evidence that the entire glbt community is living a lie.  Gender is an undeniable fact of life, yet the gay community continues to deny the relevance of gender.