Same-sex "marriage" forced upon the people of Hawaii.

The persecution of Christians has begun in Hawaii.

Same-sex "marriage" was forced upon the people of Hawaii despite the outcry of the majority to uphold God's definition of marriage.  This is what the glbt community wants.  The destruction of anyone who doesn't support same-sex "marriage.

There was a great, media-ignored, outcry against the redefinition of marriage in Hawaii.  Story-with-many-videos here. 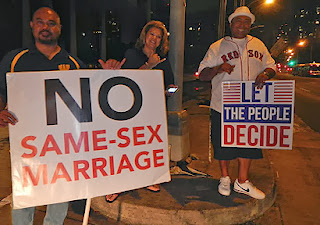 Posted by Mantronikk at 7:43 AM