Man claiming to be "transgendered" to gain access to and sexually assault women. 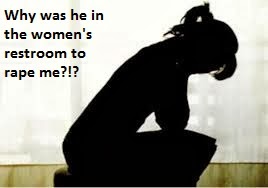 
“…TORONTO, March 4, 2014 (LifeSiteNews.com) – A biological man claiming to be ‘transgender’ so as to gain access to and prey on women at two Toronto shelters was jailed “indefinitely” last week after being declared by a judge a “dangerous offender.”

Christopher Hambrook, 37, leaned on the ever expanding legal “rights” offered to people who “identify” with the sex opposite their biology. Under the name “Jessica,” he was able to get into the women’s shelters, where he sexually assaulted several women in 2012, the Toronto Sun reports.

Court heard how one woman awoke to find Hambrook assaulting her on her bed. “Her tights had been pulled down past her bottom and her bathing suit had been pulled to the side,” court documents reveal. “She yelled at the accused, demanding to know what he was doing. He simply covered his face with his hands, said ‘Oops!’ and started giggling.”

Court also heard evidence of Hambrook terrorizing a deaf woman living in the shelter. “The accused grabbed the complainant’s hand and forcibly placed it on his crotch area while his penis was erect,” court heard.

…The same deaf women reported that Hambrook would peer at her through a gap between the door and its frame while she showered.

…Hambrook was a former stripper and escort from Quebec before moving to Toronto in 2009 and posing as a woman. While in Montreal he served four years in jail for a 2002 sexual assault of a five-year-old girl who was a family friend and for raping a mentally challenged 27-year-old woman while on bail for the first crime, reports the Toronto Sun.

…Ontario amended its Human Rights Code to make “gender identity” and “gender expression” prohibited grounds for discrimination in 2012. The bill’s sponsors said at the time that the so-called “Toby's Law” would open the door to “social change” in Canada.

…Family advocates argued at the time that the NDP sponsored bill would create a legal right for a man who calls himself ‘transgender’ to use rooms and facilities intended for women so as to exploit women.

…The bill was subsequently dubbed the “bathroom bill” by its critics. Allowing a man who calls himself ‘transgender’ to enter a woman’s area has already proved problematic in the United States.

…In 2012 a college in Washington state decided it would not prevent a 45-year-old man who presents himself as a transgender “female” from lounging naked in a women’s locker room in an area frequented by girls as young as six. Teenage girls on a high school swim team were using the facilities when they saw "Colleen" Francis deliberately exposing male genitalia through the glass window in a sauna. Police told one outraged mother that the university could not bar the biological male from the premises.

…Jack Fonseca of Campaign Life Coalition told LifeSiteNews that it “didn’t take a brain surgeon to predict that letting men into women’s bathrooms and other private spaces would eventually lead to sexual assaults.”

…“Of course this lunatic law could only make it easier for rapists and peeping toms to prey on female victims while masquerading as ‘transgendered.’”

…Ezra Levant said that the gender identity law in Ontario has made the province become a “magnet for rapists.”

…“We urge all concerned Canadians to phone, email and write Canada’s Senators pointing out that the Ontario version of this law allowed Mr. Hambrook to sexually assault two women, and to ensure that Senators do not make the mistake of granting legal cover to would-be rapists at the federal level.” …”