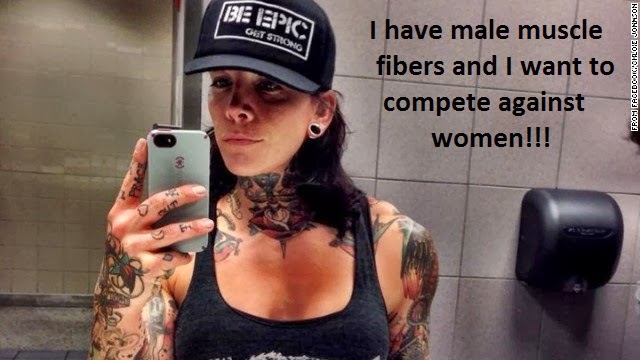 This man, who has had surgery to alter his genitals to mimic a vagina, wants to be considered a woman, and wants to compete against women in a physical competition.

Now CrossFit has to spend money to defend itself in court against this crazy man. This is the kind of behavior that inspires hatred for the glbt community. This, surgically-altered man still has male muscle fibers which gives him an unfair advantage over the females he wants to compete against. Not to mention the number of females that will refuse to compete against him if he wins his lawsuit to compete against them.

“… "They said she has an advantage over other women because of the sex she was born with, and that is completely untrue, scientifically," McCoy said, noting that the International Olympic Committee and other sports governing bodies allow athletes who have undergone surgery, taken hormones and secured legal recognition to compete in the category that corresponds to their affirmed gender.

… "The fundamental, ineluctable fact is that a male competitor who has a sex reassignment procedure still has a genetic makeup that confers a physical and physiological advantage over women," Saran wrote in a letter to McCoy that's linked to the discussion board. "That Chloie may have felt herself emotionally, and very conscientiously, to be a woman in her heart, and that she ultimately underwent the legal and other surgical procedures to carry that out, cannot change that reality."

… "Our decision has nothing to do with `ignorance' or being bigots - it has to do with a very real understanding of the human genome, of fundamental biology, that you are either intentionally ignoring or missed in high school," he said. …”