I can't stop the madness, but I can shine a light on it. 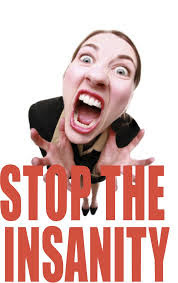 I am so glad that I discovered the Word of God when I was seventeen. I’ve been examining and studying the Bible since 1980 and I have yet to find one sentence that has been disproven. And when I challenge people to show me one sentence or one concept in the Bible that has been clearly disproven, no one can answer my challenge. For over 1,900 years, not one sentence or concept in the Bible has been disproven; how is that single fact not proof enough for some people to begin investigating the teachings and actions of Jesus Christ?

I love the Word of God because it gives me clear insight towards what is right and what is wrong. Whilst growing up under a very heavy-handed parent, I could clearly see how those in power weren’t always right, and it became my goal to always be right in my outlook on life and my subsequent actions towards other people.

I’ve been too busy to blog for quite a while, so I have a lot of material to cover. Let’s look at the insanity I see with the insight that Jesus Christ has given me...


1. A school district in California that refuses to let parents exclude their children from anti-hetero sex education classes.  Why are parent's rights being trampled by the glbt community?

“…Parents who disagree with the state’s LGBT positions “may not excuse their children from this instruction,” Wenkart continues. He then suggests that parents still having the right to “advise their children that they disagree with” such lessons compensates for this restriction. …”  Story here.


2. A Canadian man claiming to be female is suing over a dozen women for refusing to wax his genitals.  Where are the feminists to protect this woman from having to touch a man's genitals to NOT get fined!?

“…Identifying himself only as J.Y., the claims of discrimination and bullying are ironic considering what this fellow is doing to actual women. One of the estheticians, a single mom who works out of her home, already paid J.Y. $2,500 to withdraw his complaint so she could simply get on with her life. Two and a half grand, it turns out, is the amount of money that a single mom, seeing her livelihood threatened, has to pay to a man for not touching his genitals. …”  Info here.


3. A man (inspired by the “transgender’ community) who wants the courts to change his date of birth on his birth certificate.

4. A Professor being punished, and may get fired, for refusing to call a male student by a female pronoun.

“…Like a lot of educators, Meriwether assumed that biology was pretty self-explanatory. Just because a guy wants to be called a girl doesn't mean he is one. His employers at Shawnee State University in Ohio beg to differ. When Nicolas refused to call a male student "ma'am" or "she," he was hauled into his bosses' office and slapped with a personnel violation. According to administrators, acknowledging someone's biological sex with the right pronoun "creates a hostile environment." …”   Full info here.


5. Two lesbians transferring the same embryo from one to another to create a fatherless home for the child.

“…Doody harvested eggs from Bliss, and then utilized a sperm donor to create embryos, which were placed inside Bliss for five days before being removed and then frozen until Ashleigh was ready to carry them. Usually, the woman who donates the eggs also carries the embryos, but because this was not the case with this lesbian couple, the child that was born as a result—a boy named Stetson Coulter—is considered to be the first child in medical history carried by two women. …”  Sad story here.

What's going on here?  What's wrong with people?  Why can't those who reject truth leave those who embrace truth alone?