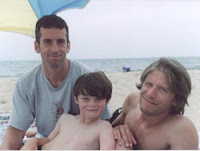 Just as "homosexual" was changed to "gay," now, man-on-boy molestation is called, "Male Intergenerational Intimacy." I think I'm going to throw up.

I DON'T think, for one minute, that all homosexuals are child molesters. That's absurd. But I DO think that at least one out of three "gay" men were seduced into the glbt community when they were children. Be advised that there is some profanity in this link.

Posted by Mantronikk at 7:00 PM