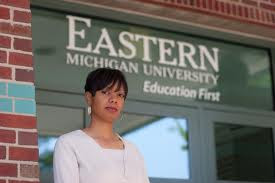 Looks like the word “tolerance” is beginning to haunt the glbt community. People are starting to see that tolerance is a two-way street, and the gay activists that yell “tolerance!” the loudest, are the most intolerant when it comes to Christians or anyone else who won’t accept homosexuality as normal. Homofascists don’t even want people who disagree with homosexuality to even be allowed to be heard. Free speech that does NOT condone or inspire violence will be labeled “hate speech” by homofascists who hate the truth. Although I have thoroughly denounced hatred for and proactive violence against the glbt community, my blog is attacked at least three times a week!

“...The U.S. Court of Appeals for the 6th Circuit ruled Friday in favor of Julea Ward an Eastern Michigan University graduate student represented by Alliance Defense Fund attorneys who was expelled from a counseling program for her beliefs. In a strongly worded opinion, the court reversed a district court decision in favor of the university and sent the case back for trial, saying “a reasonable jury could conclude that Ward’s professors ejected her from the counseling program because of hostility toward her speech and faith….” ...”
“... “Rather than allow Julea to refer a potential client to another qualified counselor--a common, professional practice to best serve clients--EMU attacked and questioned Julea’s religious beliefs and ultimately expelled her from the program because of them.” ...”
“...That her conflict arose from religious convictions is not a good answer; that her conflict arose from religious convictions for which the department at times showed little tolerance is a worse answer.” ...”
“...EMU faculty denigrated Ward’s Christian views...”
“... “That is why she asked to refer gay and lesbian clients (and some heterosexual clients) if the conversation required her to affirm their sexual practices....does not require a Muslim counselor to tell a Jewish client that his religious beliefs are correct if the conversation takes a turn in that direction and (2) does not require an atheist counselor to tell a person of faith that there is a God if the client is wrestling with faith-based issues. Tolerance is a two-way street. Otherwise, the rule mandates orthodoxy, not anti-discrimination.” ...”