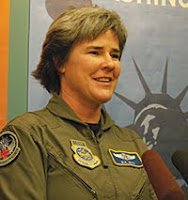 Do hetero men that were court-martialed for adultery get their jobs back too? The Universal Code of Military Justice forbids homosexual acts and adultery. (Articles 125 & 134)
I was actually on Major Witt's side when I heard that she didn't tell the military she was gay, but someone else told the military she was gay. After all, it's called don't-ask-don't-tell and she didn't tell, someone else did.
Then I found out that Ms. Witt was dating a married woman! And STILL seeing her! Now all bets are off since she is now in violation of a second, serious article of the UCMJ for which heterosexuals ARE prosecuted! Don't gays want "equality"? She took this same oath that heterosexual servicepeople took. But wait! She's gay. Okay then. Let's all go home now. She's gay and, therefore, cannot be touched by the laws that bind us mere mortals.
Story here, here, and here.
Posted by Mantronikk at 11:51 PM