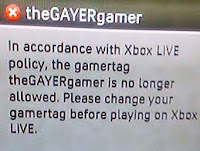 This story is comical to me. This video-game dude lives in a town called "Fort Gay," and when he entered the name of the town in an attempt to play Xbox LIVE, his account was suspended. Xbox seems to have a heteroseparatist policy that rejects both pro and anti gay monikers. Damn that's cool. They apparently don't put up with homofascism or homophobia. Now where have I heard that concept before? Story here.
Posted by Mantronikk at 7:40 PM