Words of an ex-lesbian. 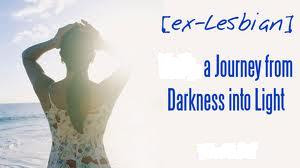 "....My first sexual experience was with a woman and I became comfortable with women and women’s bodies, so it was natural to continue that way.
I also learned that men are not sexist dogs; they’re just men and have a right to share the planet with the rest of us. As I was going through therapy, I was changing physically too. But I told everyone that I was changing to a lipstick lesbian so they didn’t know what was happening to me. But my girlfriend did. She moved out.
When I did get engaged to a man a few years later, my female co-workers were incensed. So many of them didn’t have husbands and here I was, a former lesbian getting married. Oh well, can’t make everyone happy...."
Full article here.
Posted by Mantronikk at 12:30 AM