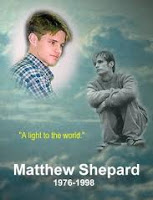 It's been said that a lie can get around the world before the truth can get its shoes on.

Today, I stumbled upon information that the man primarily responsible for Matthew Shepard’s death was a man named Aaron McKinney, a member of the glbt community. Incredible.

"...21-year-old Matthew Shepard was picked up by two other 21-year-old guys at a bar the night of his beating. Aaron McKinney and Russell Henderson were doing methamphetamine and were looking to rob Matthew Shepard who was drunk at the bar. While Henderson was driving, the story goes, Shepard made a pass at McKinney by touching his leg. At this point, McKinney, who’d been awake for a week on meth, lost it and hit Shepard with a pistol. Soon after, he told Henderson to pull over, and the beating at the fence proceeded.

Initially, McKinney used the “gay panic defense” to suggest that he lost his mind when Shepard made a pass at him, but we later find that McKinney was a bisexual who actually knew Matthew Shepard. Did he really panic when Shepard made a pass at him or did he react violently out of anger that Shepard was in the process of outing his secret homosexual life in front of Henderson? Henderson, by most accounts, was just the wheelman who tied Shepard to the fence and didn’t do enough to stop McKinney who was out of his mind on meth.

Tom O’Connor, the limo driver who Shepard occasionally hired, had a lot to say. He knew both Matthew Shepard and Aaron McKinney. He said that a few days before his death, Sheppard told him that he’d discovered he was HIV positive, which is something many homosexuals discover. He’d also claimed that McKinney was definitely bisexual because he, himself, had participated in a three-person sex act with McKinney. McKinney’s girlfriend also suggested that McKinney had repeatedly tried to get her to let one of his male friends join them in their escapades. ..."

This story is a bit of a read, but the information in it (including how Matthew Shepard's killer became gay) is shocking.
Posted by Mantronikk at 1:46 PM