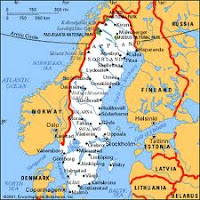 A little Swedish boy in preschool walks up to his teacher and asks,(in Swedish) "Miss Svensson. Is my father here yet?"

Miss Svensson's face contorts into an angry expression, and she yells at little Olof, telling him to stand in the corner until his "parent" comes to pick him up.

Hurt and confused, little Olof walks away and stands in the corner crying until his "parent" arrives to pick him up from preschool.


What was Olof's crime? Having the sheer nerve to acknowledge the gender of his father! This present-day, absurdist-reality scenario is being played out in at least one pre-school in Sweden, where the mere mention of a person's gender is discouraged!

"The kind of things that boys like to do - run around and turn sticks into swords - will soon be disapproved of," he said. "So gender neutrality at its worst is emasculating maleness."

“...Director Lotta Rajalin notes that Egalia places a special emphasis on fostering an environment tolerant of gay, lesbian, bisexual and transgendered people. From a bookcase, she pulls out a story about two male giraffes who are sad to be childless - until they come across an abandoned crocodile egg. ..."