A robbery in New York. 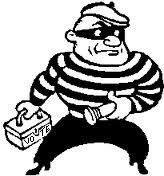 So what's new about a robbery in New York you say? The sheer scale of this robbery.
Every registered voter in the state of New York was robbed of their right to vote on the definition of marriage in their state. Not only that, the robbers were so smooth that there are some that approve of this attack on democracy.
"... "The people of New York were robbed of the right to vote directly on this issue, and the legislature forced this on the state," he tells OneNewsNow. "And really, the blame lies with the Republican Party -- for those four Republicans deciding to abandon the principles of the Republican Party and betray their voters. That's what happened, and they're going to be held accountable."

"The poll shows that 57 percent of New York voters believe marriage should be defined only as one man and one woman," says Gallagher, "and that in addition, the vast majority -- I think it was close to 60 percent -- said that they think the people of New York should have the right to decide this issue, not the legislature." ..."