The 'mo inside of Elmo. 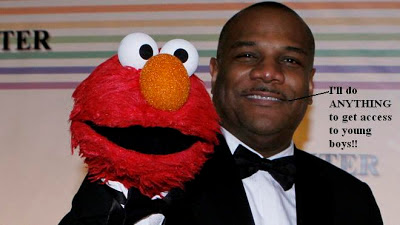 Yet again, a member of the glbt community utterly destroys a safe haven for children, and gives the phrase "tickle me Elmo," a whole new and disgusting meaning.  This  homophile, Kevin Clash, has admitted  to sexual contact with a 16-year-old boy when he was 45!!

Between childrens books, t.v. programs, prime time t.v. shows, animated films for children, Sesame Street, GLSEN, gay-straight-alliances in schools, the Boy Scouts, and NAMBLA, the gay community can't even deny their desire to reach the hearts and minds of children, WITHOUT the parental consent of those children.  Parents in Canada, where same-sex "marriage" is legal, are blocked by law from knowing what is being taught to their children in sex-education classes in grade schools.

The glbt community deceives or attacks with words like, "bigotry," "homophobe," or "intolerant," to distract from their prime goal of normalizing homosexuality to other peoples children behind the backs of their parents.  Since  homosexuality stems from emotion, it is critical for some gays to recruit children.  Homosexuality is very most often the result of a older homosexual seducing a young boy into the glbt community as he was when he was a young boy.

This disgusting story completely supports the abovementioned points.
Posted by Mantronikk at 10:31 AM