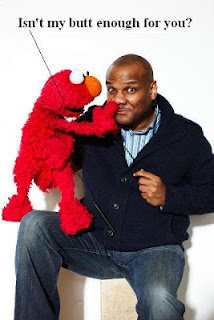 It was the Christmas of 1996 when tickle-me-Elmo was at it’s peak Until I did my homework for this post, I thought that homophile Kevin Clash had thought up tickle-me-Elmo to sexually seduce underage boys. It turns out that he didn’t, but I wouldn’t doubt that he wishes that he had. The homosexuality of Kevin Clash has ruined an icon of childhood, and tickle-me-Elmos, that once sold for $2,500, are now worthless. Maybe Mr. Clash can get a job as a spokesman for NAMBLA. Who else would hire him?

When I ask homofascists to show me the heterosexual equivalent of NAMBLA, none of them can. That says something about the nature of homosexuality.

My supporting info is here, here, and here.

Posted by Mantronikk at 7:24 AM