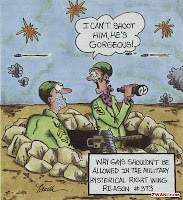 The prime, common-sense concern of straight men in the military concerning homosexual men will be the close living conditions that are often unavoidable in the military. (Homofascists will of course label these concerns of straight men as "homophobia.") But I would imagine that heterosexual men in the Armed Forces would want to be treated with the same respect that women in the military receive, like not being forced to shower with men, and not having to put up with unwanted sexual attention from men. Haven't I been saying this all along? Then today I find this.
Posted by Mantronikk at 10:14 PM