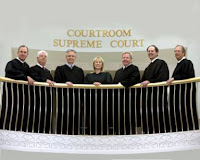 Three, Iowa Supreme Court justices were sent packing yesterday by the voters of the State. This is good news since the judges ignored the State's Defence of Marriage Act and imposed homosexual "marriage" on the people of the state.
This is a typical tactic of homofascists; to confuse sexual behavior with race, and see themselves as rescuing a downtrodden minority. Through clever arguments, the glbt community has stolen the nobility of the civil-rights movement of the African-American community.
"Iowa's Defense of Marriage act...specified one man one woman marriages, so the justices actually were violating the law they were sworn to uphold." Info here.
Posted by Mantronikk at 11:24 AM