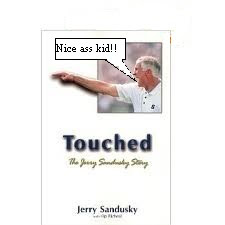 I know that some men molest young girls, but men who sexually assault young girls don’t get the same level of protection that homophiles do. Once again, the fear of being labeled a “homophobe,” has led to the sexual abuse of young boys.

“...The first case to come to light was a boy who met Sandusky when he was 11 or 12, and physical contact began during his overnight stays at Sandusky's house, the grand jury said. Eventually, the boy's mother reported the sexual assault allegations to his high school, and Sandusky was banned from the child's school district in Clinton County. That triggered the state investigation that culminated in charges Saturday.
Another child, known only as a boy about 11 to 13, was seen by a janitor pinned against a wall while Sandusky performed oral sex on him in fall 2000, the grand jury said.
And in 2002, Kelly said, a graduate assistant saw Sandusky sexually assault a naked boy, estimated to be about 10 years old, in a team locker room shower. The grad student and his father reported what he saw to Paterno, who immediately told Curley, prosecutors said.
"Despite a powerful eyewitness statement about the sexual assault of a child, this incident was not reported to any law enforcement or child protective agency, as required by Pennsylvania law," Kelly said. ...”
Original story here, updated story here.
Posted by Mantronikk at 10:42 AM