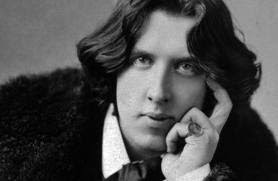 About a year or more ago, a commenter on my blog told me that Oscar Wilde was a homosexual. I filed the information away in my mind and went on about my business.

Then, just two days ago, I found out that Oscar Wilde was also a homophile. I can’t say that I was shocked, but the title of this post popped into my head today, and my heteroseparatist muse will not let me rest until this torpedo is “in the water.”

Now, it is mandatory in California schools that children honor homophiles!!

“...To be clear, I personally believe that the great majority of homosexual men also deplore Sandusky’s alleged acts. At the same time, there is a very large pedophile elephant that is hiding in the gay activist closet...

Let’s start with our children’s schools, where GLSEN, the Gay, Lesbian, and Straight, Education Network, has long advocated for the celebration of homosexual history, using tools like “North American History Game Cards,” where elementary school children learn that famous Americans like Allen Ginsberg and Walt Whitman were gay.

What the children don’t learn is that if Whitman was a homosexual, he was also a pederast, that Ginsberg was a defender of NAMBLA, the notorious North American Man Boy Love Association...

Would they also mention that he was a boy lover and that he wrote about his passionate sexual encounters with young teens no older than some of the boys allegedly molested by Sandusky?

...that SB 48, mandating the celebration of LGBT history in all California schools for all children in all grades, is now law.

There is already a Harvey Milk Day in California...

...but there’s more to the Harvey Milk story.

...at age eleven, Milk began attending performances of the New York Metropolitan Opera where he met with “wandering hands,” and soon was engaged in “brief trysts [with grown men] after the performances.” While still in junior high, he “dove headfirst into the newly discovered subculture,” and by the age of fourteen, Milk was “leading an active homosexual life.” As he grew older, the pattern reversed itself to the point that, at age thirty-three, Milk hooked up with a sixteen-year-old named Jack McKinley, one of a number of younger men with whom he was intimate.

...Kramer too was a NAMBLA supporter, and in a 2004 speech in New York City, he spoke of a “sweet young boy who didn’t know anything and was in awe of me. I was the first man who [had sex with] him. I think I murdered him” (meaning, by infecting him with AIDS). Where is the gay outcry over this?

...but the inescapable truth is clear: The gay activist closet has been opened, and the pedophile elephant is there. ...”