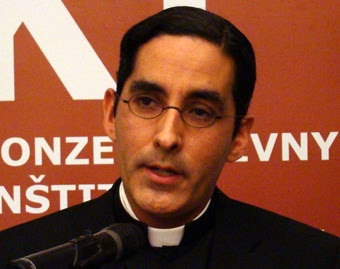 A Priest punished for following the Word of God. Wow.

In this case, the chain-of-command in the Catholic Church is apparently out of step with the Lord Jesus Christ.

As a servant of Jesus Christ, whenever a controversy concerning proper Christian conduct comes up, I go and look up what the Bible says, and I go from there.

According to the Bible, Fr. Guarnizo was right to not participate in giving communion to the “communion lesbian” because he had just received knowledge of her willful participation in a sexually sinful lifestyle.

“...Here are the facts: On Saturday February 25th I showed up to officiate at a funeral Mass for Mrs. Loetta Johnson. The arrangements for the Mass were also not my own. I wish to clarify that Ms. Barbara Johnson (the woman who has since complained to the press), has never been a parishioner of mine. In fact I had never met her or her family until that morning.

...If a Quaker, a Lutheran or a Buddhist, desiring communion had introduced himself as such, before Mass, a priest would be obligated to withhold communion. If someone had shown up in my sacristy drunk, or high on drugs, no communion would have been possible either. If a Catholic, divorced and remarried (without an annulment) would make that known in my sacristy, they too according to Catholic doctrine, would be impeded from receiving communion.

...Ms. Johnson’s circumstances are precisely one of those relations which impede her access to communion according to Catholic teaching. Ms. Johnson was a guest in our parish, not the arbitrer of how sacraments are dispensed in the Catholic Church. ...”