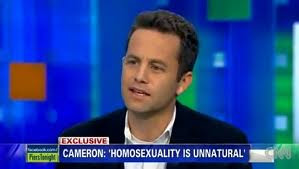 So, let me see if I can get this straight. Kirk Cameron was asked by Piers Morgan his views on homosexuality and now he’s being attacked for not supporting the glbt community. Wow.

Homosexuality is a sinful activity not a race of people, so what is the problem? How come fornicators, adulterers, and “polyamorous” people aren’t attacking him also? Why do members of the glbt community have such a big sense of entitlement? So he’s an “...accomplice to murder...” now? Really? It was this exact type of absurd slander that got me involved in the fight against homofascism.

“...and Roseanne Barr, who called Cameron “an accomplice to murder with his hate speech.”

“I should be able to express moral views on social issues,” he said, “especially those that have been the underpinning of Western civilization for 2,000 years — without being slandered, accused of hate speech, and told from those who preach ‘tolerance’ that I need to either bend my beliefs to their moral standards or be silent when I’m in the public square.” ...”

More info here and here.
Posted by Mantronikk at 9:24 AM