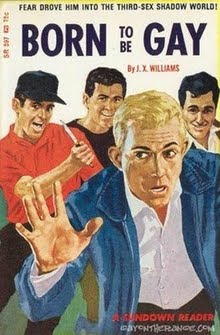 When I was writing my manifesto, I compared the glbt lifestyle to heroin addiction since no one chooses to became a heroin addict, but their choices lead to their addiction; homosexuality is not a singular choice, but the result of a series of emotion-driven choices.
"...I came to the conclusion that the gay lifestyle, although not an overnight choice, still begins as an emotion, sparked by sudden and/or gradual childhood, psychological trauma. And then becomes a daily choice to ignore or rebel against the normal order of human life. Homosexuality isn’t a choice, but it is still a matter of choice. ..."
Anyhow, today I found yet another piece of info to support my observation.
"...Steve Abrams, 51, understands what caused his homosexuality and resents that society and gay activists lied to him. Society has descended to the point where the State is actually foisting a developmental disorder on its citizens.


"As an adult and after great pain (I am HIV positive) I realize everything that I thought I was and was told I was is a enormous lie....[Homosexuality] is not a choice. It is a compulsion brought on by an arrested development. It then becomes an addiction like an alcoholic or drug user." ..."

Full story here.
Posted by Mantronikk at 11:24 AM