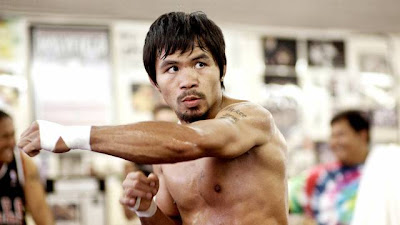 If...twenty years ago, someone told me that a world-famous boxer would be banned from a shopping mall for stating that he supports God’s definition of marriage—something that is between one man and one woman—I would’ve thought that that person was crazy. I would’ve thought of a polite way the extricate myself from any further conversation with that person, and quietly moved away from them. And that person would never hear from me again. But now, in the absurd, homoOrwellian world that I live in, this insanity has actually come to pass.

“...During a May 12 interview with the National Conservative Examiner Pacquiao said the Bible is clear on homosexual activity and that with regard to marriage we must follow “God’s words first ... obey God’s law first before considering the laws of man.”

While Pacquiao is standing by his statements to the Examiner, he has objected that his remarks were taken out of context and that he never cited Leviticus or stated that anyone in the homosexual community deserved death.

“I didn’t say that, that’s a lie… I didn’t know that quote from Leviticus because I haven’t read the Book of Leviticus yet,” he said. ...”