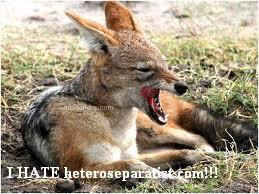 A person that is very most probably an anti-Christ bigot said that one of my videos was banned from YouTube. That struck me as curious, since I’ve never even made a video, much less for YouTube. When I investigated the accusation, I immediately discovered that it was yet another false accusation from someone who very probably thinks that anyone who doesn’t support male-on-male sexual activity is a “bigot.”

Yet the more I clarify heteroseparatism, the more false accusations I get. That’s no surprise to me. That’s why I wrote my manifesto, to cover all of the little lies that are told about those who don’t support the glbt community.

So now I’m laying down a challenge for each person who can only attack me with a like-minded group to support them. I’m challenging anyone from freejinger.org to find a post on this blog where I have condoned proactive violence, hatred, or oppression against the glbt community. Until someone from freejinger.org can face me here, where I guarantee a one-on-one debate, the commenters on the linked-to thread above are nothing but anti-hetero bigots.

Will anyone one of those cyberjackals take me on one-on-one? No they won’t. Jackals cannot fight mono-e-mono.
Posted by Mantronikk at 12:49 PM