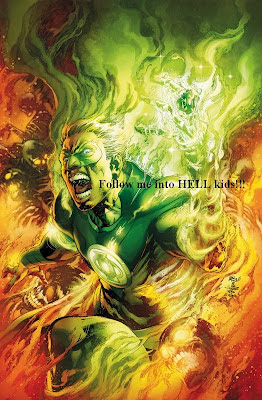 Apparently, the powers that be at DC Comics are afraid of being called homophobic, and are now allowing homofascists access to the impressionable minds of children. When will DC Comics approve of a superhero that smokes cigarettes? After all, male-on-male sexual activity is more harmful than smoking.

If I had young children in my home, Green Lantern comics wouldn’t be allowed under my roof.

“...The character is different than the more modern Green Lantern, ladies' man Hal Jordan, who stars in his own comics and is a member of an extraterrestrial police force called the Green Lantern Corps. Jordan's also part of DC's Justice League with Wonder Woman, Batman, Superman, the Flash and Aquaman.

...In the current "New 52" continuity, the Alan Scott Green Lantern and the Justice Society operate in a different universe than the Justice League. Robinson said in the "Earth 2" universe, Scott is the sole Green Lantern, and "the strongest, most important super-powered character" in the world. ...”

My supporting info here.
Posted by Mantronikk at 1:07 PM