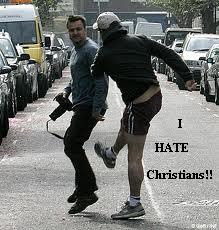 I wonder, could a Christian photographer be sued for refusing to take pictures of sex toys, or heterosexuals dressed up in S &M gear? Or children in sexually suggestive poses?

Same-sex marriage was not even legal in the state of New Mexico, but Elane Photography, a Christian company, was still fined for refusing to photograph a ceremony of sexual sin. Apparently, a person’s sexual activities makes them a member of a legally protected class. Is this why some people become gay? To belong to a protected group? This is why I fight homofascism and marriage redefiners. I’m fighting to protect my freedom to walk away from the glbt community. Homosexuality is not innate like gender or skin color; people can leave the glbt community anytime they want to.

“... “Should the government force a videographer who is an animal rights activist to create a video promoting hunting and taxidermy? Of course not, and neither should the government force this photographer to promote a message that violates her conscience. Because the Constitution prohibits the state from forcing unwilling artists to promote a message they disagree with, we will certainly appeal this decision to the New Mexico Supreme Court.”

...Benjamin Bull, chief counsel for the Alliance Defense Fund, noted at that time, “Homosexuals got exactly what they wanted. In the marketplace of ideas, one side has now been censored. This [situation] is exactly what homosexual activists have in mind.”

...Interestingly, a subsequent poll revealed that almost half of Americans believe that Christians in the United States are being persecuted by homosexual “marriage” advocates who take legal action against them over their religious beliefs, and almost one in three Democrats believes such persecution is “necessary,” according to the alarming results of a new poll

...But 31 percent of Democrats, as well as 12 percent of Republicans and 24 percent of independents, said, “Such tactics are necessary.” ...”