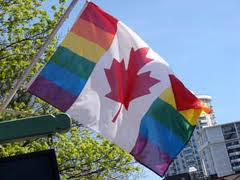 Some people wonder why I fight homofascism with such tenacity. Some people tell me that homofascism will never gain a strong foothold in my country. I call (bovine feces)!! I collect data to counteract homosexual propaganda and to defend myself and the concept of heteroseparatism against those who have a demonic desire to attack, discredit, and mischaracterize me.

Whenever I get involved in an online debate about the danger of redefining marriage, I start sending links to the information that I’ve gathered on this blog, and whoever it is that’s attacking me…suddenly disappears! The truth is an immortal weapon/shield, and whoever lives in the Truth will outlast their opponent.

Now, in Canada, where same-sex “marriage” is legal, a “registry of homophobic acts” has been started. How is this not state-sponsored homofascism?!?

“…a Quebec homosexual activist group has launched a “registry of homophobic acts” with support and funding from the Quebec Government’s Justice Department. Standing alongside Montreal Police Chief Johanne Paquin and Commander Alain Gagnon, the leadership of the group Gai Ecoute launched the anonymous tipster registry at a press conference today.

…“any negative word or act toward a homosexual or homosexuality in general…injurious mockery, inappropriate media coverage…

…anyone who has experienced or witnessed an act of homophobia “must” report it to the registry of homophobic acts.

…the Quebec Justice Ministry’s department of “The Fight Against Homophobia.” The Justice Ministry was tasked with fighting homophobia in 2008 and last year pledged $7 million to ‘anti-homophobia’ activities.

…LifeSiteNews spoke briefly with Roger Noël, the coordinator of The Office of the Fight against Homophobia in the Department of Justice. Noël refused to answer questions about the registry…

…“The compilation and analysis of these data will better identify the problem and will enable us to act at the level of prevention.”

…the registry as a “means to instill a climate of oppression and fear to anyone who disagrees with any of the opinions of the homosexualist movement in Quebec.”

…“Anyone who might believe that a homosexual act is unacceptable at a moral level” is being sent a warning “that they will end up on a list,” he said. “A list to be used for a future purpose which in my opinion is to punish.”

…“It is really about inciting a climate of fear using the media, especially with the presence of the police. Any criticism will be interpreted as homophobia and eventually down the road there will be consequences.” …”

The full story on this latest level of Canadian homofascism is here.
Posted by Mantronikk at 11:33 AM