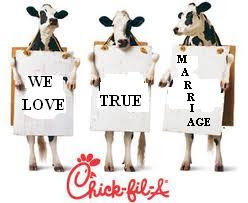 Chick-Fil-A hires gays and serves gays, but they support true marriage also. What's wrong with that?!

Apparently, the mayor of Boston, a Mr. Thomas Menino, has embraced homofascism and won't allow Chick-Fil-A to open in his city. What!?! Does he think that he'll live forever? Does he not know that someday he won't be mayor anymore? Mr. Menino thinks that Chick-Fil-A, "discriminates against a population."

Thanks to your recent efforts at DumpStarbucks.com and DumpGeneralMills.com, we've shown the cultural elite, the gay millionaires who fund anti-marriage initiatives, and the biased media that the defenders of marriage are willing to put our money where our mouth is.

Well, this Wednesday, we have a chance to do it again—and this time even more literally—by coming out in support of National Eat at Chick-fil-A Day. …”

Info here, here, and here.
Posted by Mantronikk at 1:38 PM