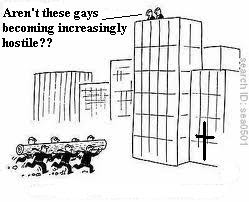 If a bachelor went into a Christian-owned bakery and asked them to bake a cake shaped like a woman's breasts, behind, or crotch, for his bachelor party, the owners of that bakery would refuse to do so. Likewise, if a woman were to ask the same Christian business to create a cake shaped like a man's sexual part for her bachelorette party, her request would be refused also. Also, a polygamist wouldn't be able to have a wedding cake made, by this Christian bakery, with multiple brides standing on both sides of a single man.

Why then would a gay couple go into a Christian bakery and request a cake for their "wedding"? And why would they twist-off when they were refused? Homosexuality isn't like skin color, homosexuality is an activity. Doesn't everybody know that there are certain sexual activities that Christians do not support? Was this an intentional act to harass Christians?

Story here and here.
Posted by Mantronikk at 1:02 PM