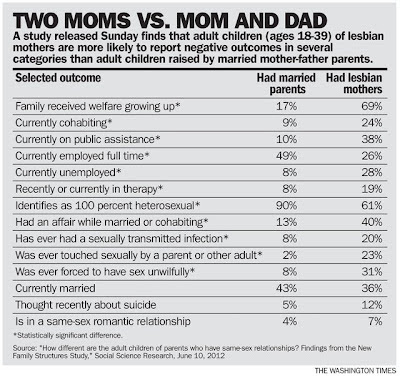 This is why I blog about homofascism whenever my, roll-of-the-dice work schedule permits.

I didn't know that the man who gathered the data for this info was under attack, but I'm not one bit surprised that homofascists are trying to destroy him.

Yet, those who need a "study" to believe what they hear, have flipped out because the Regnerus study confirms common-sense observations about the benefits that a true family provide to a child.

“…Mark Regnerus’ recent study on children who are raised by gay parents. Regnerus’ work has since proven to be very controversial because it does not paint a positive picture of children of gay parents. Even though it’s based on scientific methodology, it suggests conclusions that cut against the prevailing gay rights narrative. As a result, folks on the left have been calling for Regnerus’ head on a platter.

…the witch hunt is officially on. A gay blogger lodged a complaint with the President of the University of Texas, alleging that Regnerus had engaged in “scientific misconduct.”

…This whole thing is outrageous on many levels. There is nothing untoward about this study.

...just released a statement today defending Regnerus’ work as scientifically credible. The push-back is coming simply because some people don’t like where the data led.

…Normally studies like this one are vetted by the scholarly community in subsequent publications. But that is not good enough for the gay activists. The thought-police are out in full force not to counter Regnerus in print, but to destroy his career and reputation.

…the social pressure will transform into governmental pressure, and Christians will suffer. We will look back on moments like this one as one more step down the path of intolerance of Christian views. Mark Regnerus is in the crosshairs now, but it will be all of us before too long. …”

My supporting info is here and here.
Posted by Mantronikk at 12:03 PM