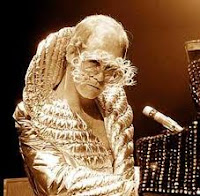 I've already shown, on this blog, that Elton John is not above pursuing young boys for homosexual purposes. My evidence is here. Now it seems, that Elton John and his "husband" are going to raise their own little boy scout.
Wow. I now live in a World where an openly homosexual man can cavort around on stage with young boys in boy scout uniforms in an overtly homoerotic fashion (no pun intended), and that same man is allowed to, with his "husband," have custody of a boy in their homosexual household. OMG. Who's fault would it be if Mr. John and his gay lover eventually molest and/or rape this young boy? I mean, what bigger clues could Elton John give to whatever child-protecting agency is in his country? He's a homosexual man who's been on stage with boys in boy scout uniforms as homoerotic dancers and yet he is allowed to have constant access to a male child behind closed doors in his own home with his "husband?!" HOW MANY MORE, I-MIGHT-BE-A-DANGER-TO-A-YOUNG-BOY, CLUES DOES HE HAVE TO BROADCAST BEFORE HIS GOVERNMENT ACTS!!! What's next? An adoption agency run by NAMBLA?
Sick, twisted story here.
Posted by Mantronikk at 9:05 PM