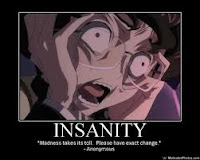 When a society abandons sexual sanity, i.e. the definition of marriage as being between one man and one woman, a multitude of "diverse" definitions of sexual normalcy will follow. I call it l.o.s.s.
A Mr. David Epstein of Colombia University is in some legal hot water for having a consensual, sexual relationship with his 24-year-old daughter. His legal argument is that they are both consenting adults and that the government has no right to prosecute them for their private, sexual conduct. Does this argument sound familiar? It does to me.
What is the legal basis for forbidding their sexual union since abortion is legal? I mean, the legal basis that outlaws incest would, logically, be the birth defects that are probable in the offspring of such a sexual union. So, if birth defects can be eliminated either by sterilization, abortion or by in-utero genetic resequencing, what is the legal problem with the sexual relationship that Professor Epstein is having with his adult daughter? Is not Professor Epstein's argument valid when Biblical, "old-fashioned" values are set aside? Does he not have the legal right to pursue happiness by having a consensual, sexual relationship with his 24-year-old daughter? Isn't anyone who is disgusted by such a relationship a patrisexualphobe?
Story here.
Posted by Mantronikk at 4:05 PM