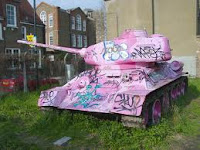 An Army lieutenant colonel is refusing to sign an order to send his men to, "...mandatory training sessions intended to change their attitudes toward homosexuality."
Now, just yesterday, I heard African American/Black people compared to homosexuals. And I know that most people who lack the ability to discern the difference between race and sexual misconduct will see the repeal of DADT as the same as the racial desegregation of the military. This is wrong. Homosexuality is a behavior, not a race. So it is wrong to equate the two.
Story here.
Posted by Mantronikk at 4:33 PM